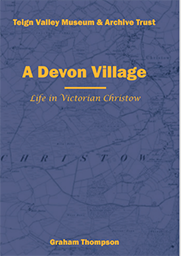 A Devon Village – Life in Victorian Christow, by Graham Thompson

In the first comprehensive account of village life in Christow in the Victorian era, local author Graham Thompson has uncovered some remarkable facts.

The village contained a serial criminal who spent 17 years on and off in gaol but never seemed to learn his lesson – and a Victorian prison was no easy option. He’s also found out about the 15 year old kitchen maid who lifted herself up to become a nursing sister in Colchester, Essex at a time when such a feat was very rare, especially for a woman.

Graham has brought his forensic research skills to bear on education, entertainment, religion and crime. His latest book, A Devon Village – Life in Victorian Christow, explains how villagers coped with poverty and looks at the various statistics dealing with life, marriage and death.

All of this makes it an ideal companion for anyone researching their family history, but it adds much more to the life of the village, bringing to life just how people spent their time before there were phones, televisions, modern domestic appliances or cars.

All sales proceeds will go to Teign Valley Museum & Archive Trust operating as Teign Valley History Centre. The Trust is cataloguing and digitising its archive which has about 10,000 items and artefacts. It will run exhibitions on different subjects. When digitising is complete anyone will be able to access our collection whilst we invite anyone to either give or loan items of interest. Our wish to create a permanent exhibition in a purpose-built building remains a key target.

Books are available from Graham Thompson

Jacqueline Patten reviewed this book in "The Devon Historian".

The villages of the Teign Valley between Dunsford and Chudleigh are one of the areas in Devon that are often overlooked. It is, therefore, encouraging to learn that the Teign Valley Museum & Archive Trust, who published this book about Victorian Christow, is active and working to ensure that the past and present history of the area is recorded. In the twenty-first century Christow is a vibrant community, catering for the needs of all ages and interests. In A Devon Village Graham Thompson writes about life in the village in the nineteenth century, when it was also a vibrant community, due to the important contribution that mining and agriculture made to the national economy.

A Devon Village is divided into six parts, comprising eighteen chapters. The first part opens with geographical, geological, and historical detail about the area before 1800. This is followed by an analytical explanation of why and how the population of Christow increased and fell during the nineteenth century, reaching its peak between 1855 and 1865. Detailed maps and statistical tables illustrate the facts.

With the Industrial Revolution and the resulting development in technology, the mining industry was able to reach its full potential. Pumping engines solved the problem of removing water when deep shafts were created. Demand for materials that could be mined increased. The natural resources of the Teign Valley meant that lead and silver mines which had previously been difficult to access, were opened. Miners became a migrating sector of the population, moving from area to area as mines were opened, depleted and closed. Inevitably the impact of this on the local community was significant. There were new opportunities for the indigenous population as work was to be found in a number of ways related to the mines, sometimes directly, sometimes indirectly.

Farming continued to be pivotal to the village. At the beginning of the nineteenth century most of the property was owned by Lord Exmouth and Sir Lawrence Palk. The next hundred years was one of change, and by the end of the century there were more owner/occupiers or private individuals owning several properties which were rented. This is significant because with the Electoral Reform Act of 1832 criteria for eligibility to vote changed and was dependant on the value of property owned. By the end of the century there were one hundred and ten men in Christow eligible to vote. Women were still only entitled to vote in county elections, not Parliamentary elections.

The section of the book devoted to birth, marriage, death, and health provides an interesting analysis of the mortality rates in infancy and adulthood. Hazardous working conditions and poor hygiene were part of the norm. A lack of medical knowledge and resources meant that any illness was to be feared and industrial injuries would often mean it was the end of employment. Although nursing was becoming valued as a profession, the level of care and support was inadequate.
In the final part of the book, Social Aspects of the Village, the first chapter gives background information about the Social Stratification in the country and how it pertained to Christow. It is relevant to the other chapters in this part. In the chapter about individuals there are cameo accounts of some of the people who lived in the village during the century. Biographical details of the Palks and the Lords Exmouth, are followed by accounts of the people who had 'fifteen minutes of fame' and it is these that provide the interest and insight into scandal, tragedy and good, in a Victorian village. The century saw many changes that were for the better. The author writes about the improvement in education and law and order. For both, laws enacted during the time were to create a solid foundation for the future. Leisure time activities of the period are not always given the importance they deserved, the author addresses the subject in Christow. With the public houses and the Church and Chapel providing the focus for village pastimes; bell-ringing, ploughing matches, Whitsun 'merriment and jollification' and other annual festivities were enjoyed and provided entertainment for all ages.

Throughout the book tables and graphs augment the prose and detailed analysis enhances the historical detail. Original documents, newspaper accounts and background reading have been consulted and are credited. The extensive bibliography is just one indication of how much time the author has devoted to research for A Devon Village. The author's meticulous and painstaking research is evident and he is to be congratulated.
(c) Teign Valley Museum and Archive Trust, 2022