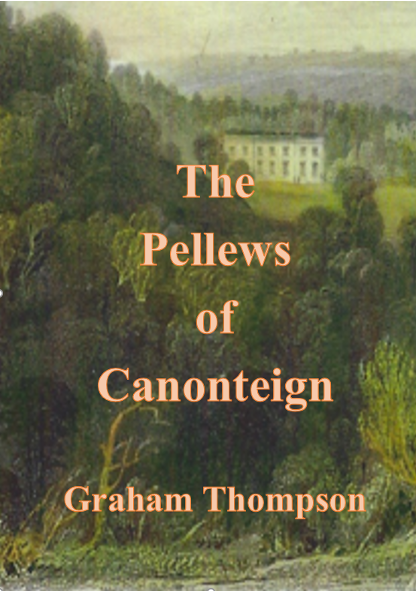 A new book by Graham Thompson

Admiral Sir Edward Pellew, first Viscount Exmouth was Lord of the Manors of Christow and Canonteign. His exploits in the Royal Navy and his care of his fellow sailors deserves to be better recognised.

This book explores reasons for his invisibility and why he should be as well known as Lord Nelson. It also records the extraordinary contributions his family have made to society and traces the family back to 1195.

Available from Graham Thompson for £7.95 plus P&P grahamt@tvhistorycentre.org

All proceeds go to Teign Valley Museum and Archive Trust to support the local archive of life in the Teign Valley.

Teign Valley Museum & Archive Trust has, within its objectives, education and encouragement to research into local and social research as it applies to the Teign Valley. Anyone can carry out research to help our understanding of how people lived before us. This article explains why I looked at an aspect of Valley life as an example of what can be done.

Having written about Christow in Victorian times in my book, A Devon Village, Life in Victorian Christow, which dealt mainly with the mainstream of Christow residents I felt I should provide a counterbalance in the aristocracy of the Valley, perhaps developing a contrast in the different modes of living. Books have already been produced about most local aristocrats and large landowners, but the Pellew family have been left out.

In addition, the obvious attraction to me with my long-held interest in marine matters, was the naval career of Edward Pellew, a Cornishman who ran away to sea and rose to such heights in the Royal Navy. Many boys ran away to sea. It was a romantic option in contrast to working on a farm, which would not attract many boys looking for adventure. A similar diversion is seen in boys who joined the army, often lying about their age.

The reality was, of course, different although a naval diet was often better than they had experienced at home. The hours were long and arduous and scaling the rigging in bad weather must have been terrifying.
Edward had taken to the sea as a young child and soon settled into the life. He was soon to become almost instinctually aware of the wind direction which helped when approaching an enemy ship to take full advantage of the attack. His expertise resulted in several enemy ship’s capture which brought himself to the notice of the Admiralty, and this resulted in his rapid promotion. His progress was not complete plain sailing and these problems are highlighted in my book, ‘The Pellews of Canonteign’.

Quite often the hereditary system allows descendants to inherit a title when frankly they have done nothing to deserve it. An example is seen in the family of local landowners, the Palks. Sir Robert Palk had been made a baronet in the 18th century after service in India with the East India Company. His last direct descendant died in penury after a life of crime.

However, a better outcome was experienced in the Pellew family. Whilst Edward’s two eldest sons chose the life of a naval officer his third son, George became the Dean of Norwich Cathedral. Later the fifth Viscount was a self-made engineer who became a racing car driver and understood car engines to an effective degree. The seventh viscount had been a chemist looking into dyes whilst the eighth viscount built sports cars in the 1930s.
They were to some extent dependent on their ancestors’ wealth gained by his prizes of ships captured at sea but also to their inherited expertise.